Holy cow! WHAT a fun weekend we had. It was great seeing old friends and new faces alike. The trials were held in Concord, NC and we had 8 out of 12 passes and an additional 5 EECTs (instinct test) pass. Congratulations to all of the handlers/hounds and a special congratulations to our Later & London for passing their EECTs and to our special friend Paisley on her new MTX with Michael handling. It was a beautiful thing to watch that team work together. Pictured below was her sucessful ID right on the Cracker Barrel front porch rockers! It was awesome! 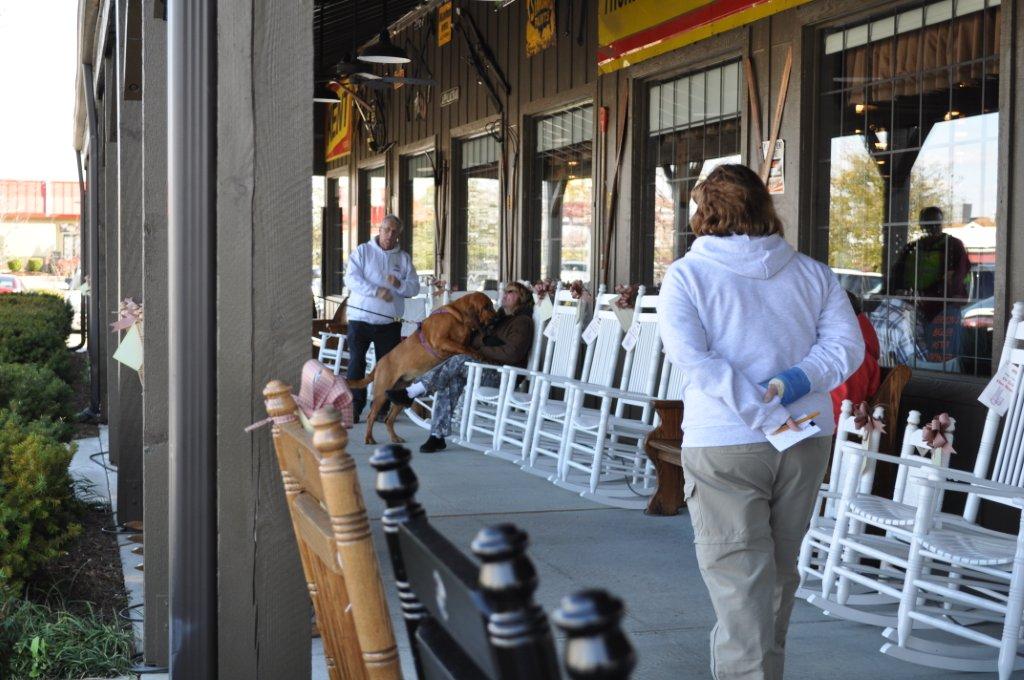 Geez! I never seem to update this news feed as regularly as I intend to. M+M Bloodhounds wishes you and your family a wonderful Christmas and a healthy, happy and prosperous new year! BTW, we still have not taken our christmas card photo – nobody was left out, we just haven’t done it yet ! 🙂 Maybe it’ll get done in early 2012.

Congratulations to Higgins on his new GCH title earned at the Winston Salem, NC shows. Higgins is a very handsome fellow and well deserving of this accomplishment. We are so proud! 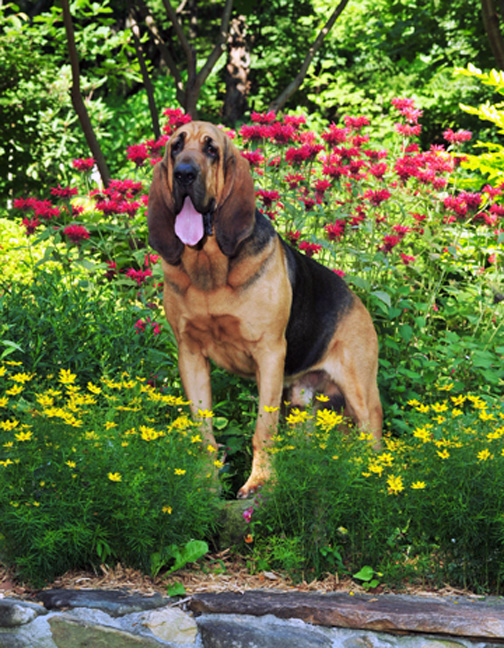 Time flies when you’re having fun … :(

It’s hard to believe that all of our puppies have gone to their new homes. 8-10wks just isn’t long enough with them. However, it’s time for them to spread their wings and enjoy their own families, etc. We look foward to their future and seeing them again – hopefully soon! 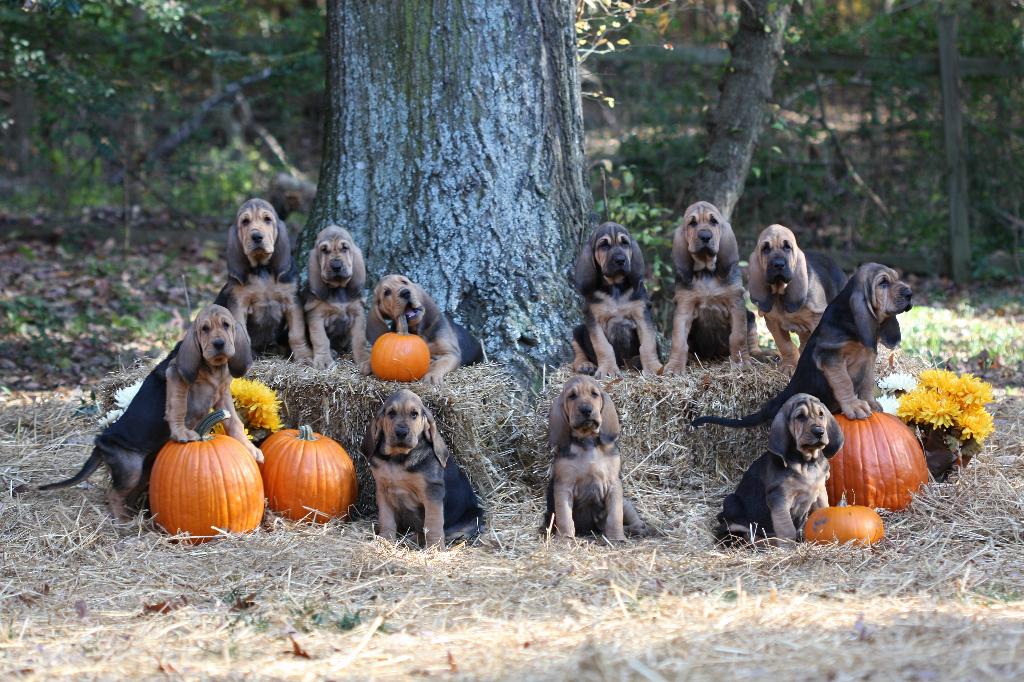 After coming for a visit to see the puppies last week, Bev went home to a little adventure. This is the email I got the next day. We are SO proud of Higgie!

“Oh by the way..Higgins had an actual search and rescue last night(sort of)  I wasn’t home 30 mins and I had a frantic, crying woman knocking at my back door…she lives down the road and lost her havanese…took Higgins to where the dog was last seen, scented him on the dog’s blanket and off he went… we got so far and stopped(it was just too dark) but we knew this was the way the dog had gone…everyone focused on that area found the dog about an hour later…it was pretty cool.  Higs loved it.”

On September 13th, two days early, our latest litter came into this world. We have 11 healthy surviving puppies from a litter of 15. There are 6 girls, 5 boys and they’re all black/tan. Mom and babies are doing well! Enjoy puppy pictures by clicking here.

In one of our other businesses that we work, we recently qualified for a free black BMW of our choice. We, of course being the dog people that we are, chose the X5 because it will hold a dog crate! LOL … one of the requests is that you submit a photo to the company once you get the car.  How could we take a photo without a Bloodhound in it?! Enjoy 🙂 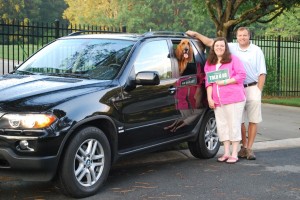 To find out more about our business you can visit our BodyByVi website by clicking here!

We have an announcement – We’re Expecting!

Well, not me of course! We’re expecting puppies! Please visit our Current Litters page for information. We’re accepting applications for this litter.  If interested please contact us for further information. 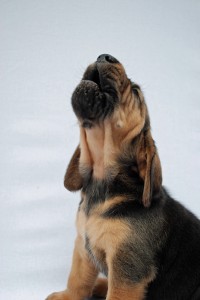 We’re surviving the heat of summer! London & Later were out for playtime and gave me this look to let them back inside! 🙂 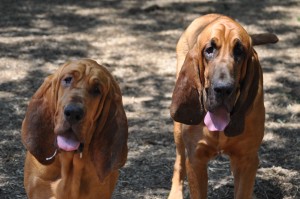 Greenville & Salem is where it all happened!

Yet again it’s been forever since I’ve posted. I seem to stay so busy and forget about posting a blog note! We actually have been showing a little bit. At the end of July, we showed in Greenville, SC. Friday’s show resulted in London’s first champion points earned with her going best of winners. Price went best of breed this day as well! Saturday/Sunday London went reserve winners bitch to a major and Higgins (CH. Sherick M&M’s Reflective Memories, CGC, MT, MTI, MTX) went select dog both days to gain two Grand Champion majors! This was the first time he had been in the show ring in about 3.5 years! As you can tell, by his titles, he’s been out working on his man-trailing. It’s very satisfying to have two brothers recognized in the ring AND for both of those boys to be titled man-trailers as well. 🙂

Fast forward to last week/end … I traveled up to Salem, VA with Price & London. Price took a clean sweep by going best of breed all five days!! Sat/Sun he also made the cut in the group. London went reserve winners bitch on Saturday to her sister, Whisper, which was a 5pt major. Sunday London won Winners Bitch for a 4pt major! THE best news of this entire weekend was Price’s breed win on Saturday finished his Grand Champion title …. and drum roll … gave him his 6th title making him eligible for induction to the American Bloodhound Club’s Working Dog Hall of Fame!!! I am so proud of him, I cannot accurately put it into words. What a very special boy he is. His registered name now reads: GCH. CH. Sherick M&M’s Priceless Memories, BN, RN, MT, MTI …. and what priceless memories he continues to give us!

Lastly, this past weekend in Salem proved yet again to be a wonderful time with old friends and meeting new friends! For those of you who know me, Fin gets to be with him Mom at most times which includes going on trips. I guess it ‘pays to be mini’ when Mom can find room for you in the corner of the minivan 🙂 Fin’s highlight off his weekend was meeting his new friend Lisa, the jumper Kharma AND running his heart out in one of our friend Jill’s many fenced areas. Enjoy these pictures taken by Price’s Mom, Chip Page! 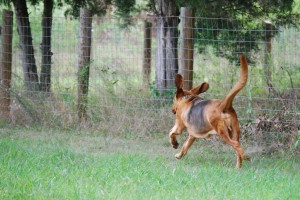 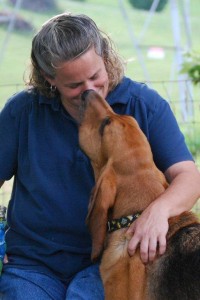 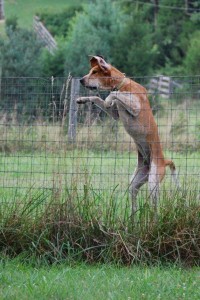