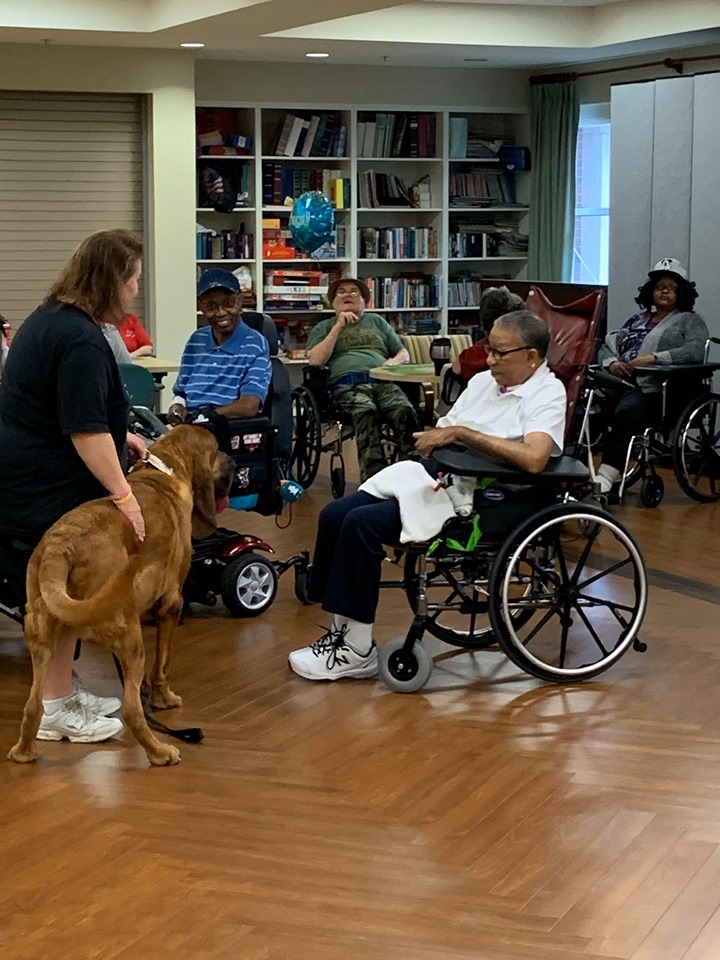 Later is such a special boy, a gentle giant who has never met a stranger and loves absolutely everyone. I had the privilege of being with Molly & Michael when Later came into the world and I have been allowed to spend a great deal of time with him over his 9.5 years on earth. During his first years I stayed with Molly & Michael a considerable amount of time, sometimes for weeks or months at a time, and developed a close bond with him. I kept him when they were out of tow, he came to Aunt Lissers (as Molly calls me to her dogs) to visit and I took him to my advanced canine massage class as my massage subject. He did great!! I took two that night and had the smallest and the largest dogs in the room. OH! Didn’t you know? Later is big, make that huge. We joke that he is the largest Bloodhound on the planet. He truly is Clifford The Big Red Dog. This is why I thought he’d be great for Pet Therapy so in the fall of 2019 he came to stay with me to train and complete his three required test visits with our favorite ADT tester, David.

Later is a big dog in any house but to be the sixth Bloodhound in a 1300 sq ft home on only 0.19 acres, let’s just say he stands out! He did great on these test visits. The first and third visits are always at the nursing home where David has an established relationship and sets most of his evaluations. The second visit is always at the Columbia, SC Metropolitan Airport. It was a blast! Getting through security Later had his own ideas. He had to walk through the scanner with no metal on which meant no collar and no leash. He went through without incident. I walked him to it and the TSA agent called him from the other side. Piece of cake, right? NOPE! Later gets through and takes off happy to be free and on display! It was hysterical-4 adults chasing a Bloodhound in the TSA pit! I wish we had photos. Everyone loved the great big red dog and almost everyone asked for a visit. At least half of the passengers knew the breed, which is unusual. As everywhere, he was a hit and breezed through his test. For the final test, Molly came with us and visited with us. He was so perfect and received his certification.

Later hasn’t gone on visits yet but is my pick dog for a program I am trying to start in Columbia for the children of violent crimes. This ‘Court Dogs’ program would allow for Later to assist children through the trial process and even sit beside them during testimony giving them support when confronting their offenders. Some states have this program but the state owns the dog. This would not be that type of program but SC does not currently have anything like this so it is all in the development phase. We’ll keep you posted as it comes to fruition!