Owners: Every “little bit” of her loved by Molly & Michael Nye 🙂 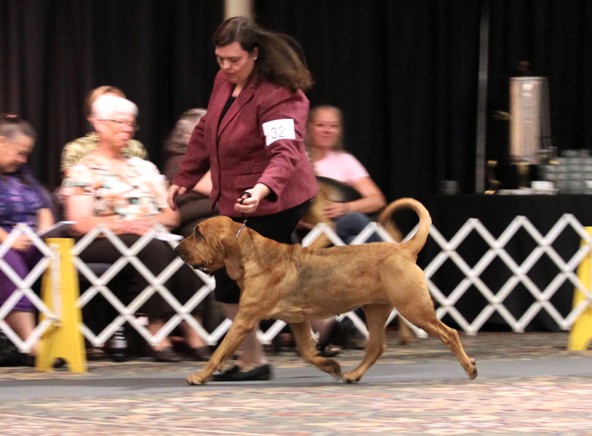 Pictured at 24 months, going on to WB/BOW finishing her championship at the ABC 2013 National Specialty 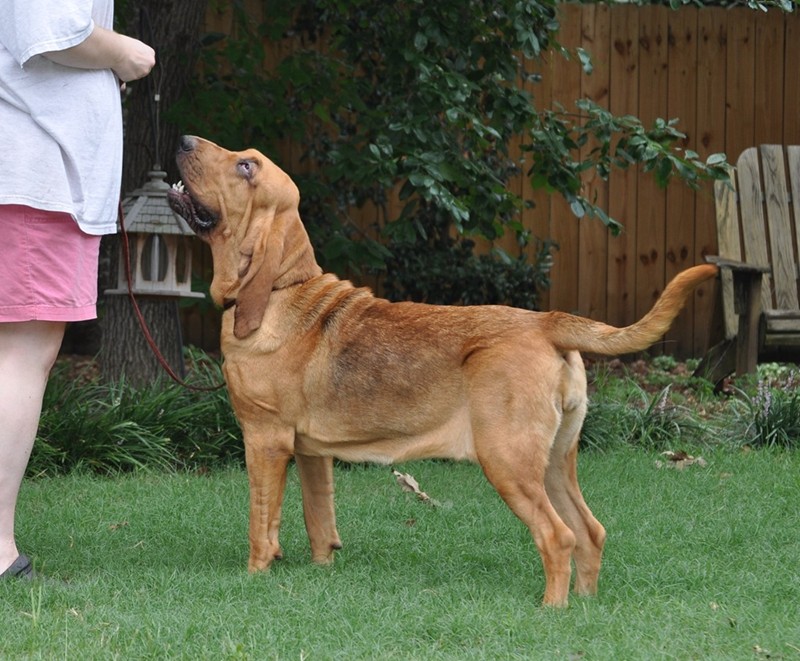 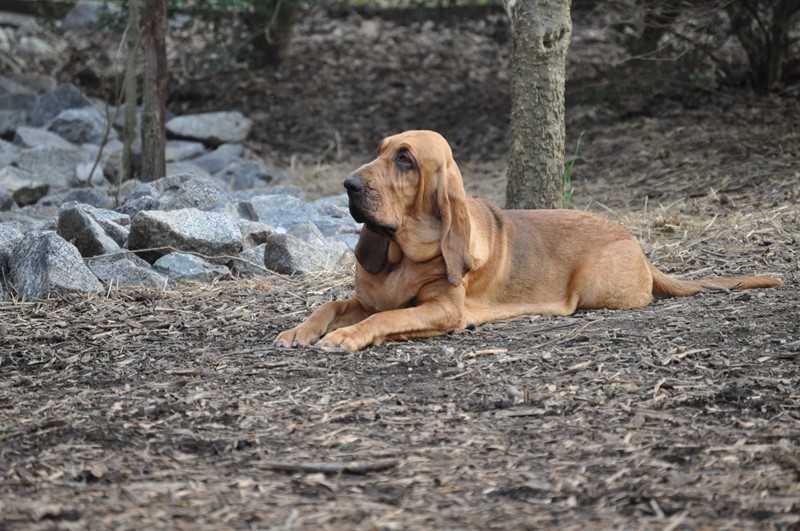 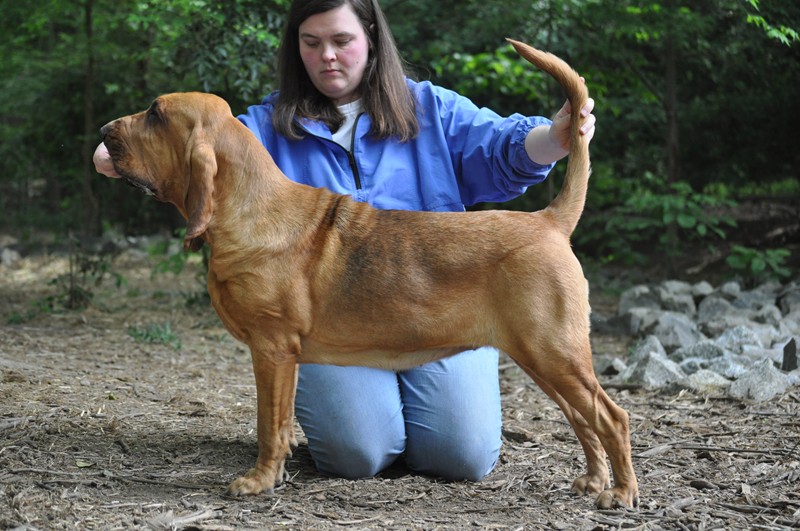 Little Bit was born the runt of her litter of 15 puppies. 11 of those puppies survived and Little Bit was a force to be reckoned with (she still is!). Even though she was small, she was a fighter.  She had a bit of trouble at times but with a little extra love and the faith to believe in her, she came around. She became ‘red girl’ and eventually earned the nickname Little Bit in the whelping box b/c it was so obvious she was the peanut of them all. When I decided that I was going to keep her, that she was meant to be a part of our family, I couldn’t come up with any other name that suited me. SO – it stuck! 🙂 Little Bit is a gift to us, especially me (Molly) and I am grateful to have her.

I kept saying when she was in the whelping box, “If this little bit looks like something I can finish her championship, I’m just gonna have to keep her!” … and little did I know that she would blossom into this beautiful puppy and a ‘mini me’ of her mother. I have admired her mother, Rio, since she was a little puppy. Rio is the style of bitch that I love and to have a ‘mini me’ from her excites me more than you know. She may be smaller (which is okay by me!) but she has plenty of substance to go around.

Little Bit’s personality is quite amusing. She is full of life, full of personality, full of HERSELF! She’s a small package of dynamite. She’s smart, clever, witty and truly does like to please her Mom. Doing obedience has been so fun with her so far. She’s smart and you certainly have to be one step ahead of her. 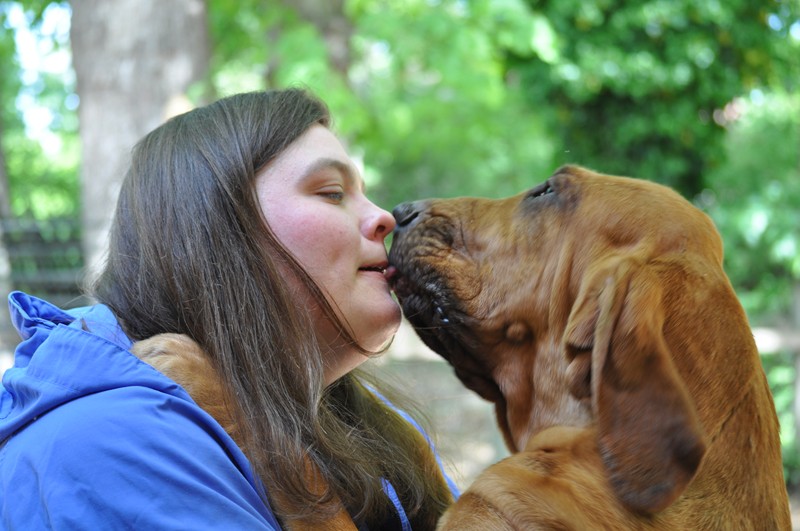 She is a bit like her uncle, Fin, in that everyone falls in love with her. I cannot tell you how many people have asked to take this girlie off of our hands. My reply, just like with Fin, is that you’ll have to step in line and it’s a long one! Little Bit truly is one that you “can’t put a price on!” 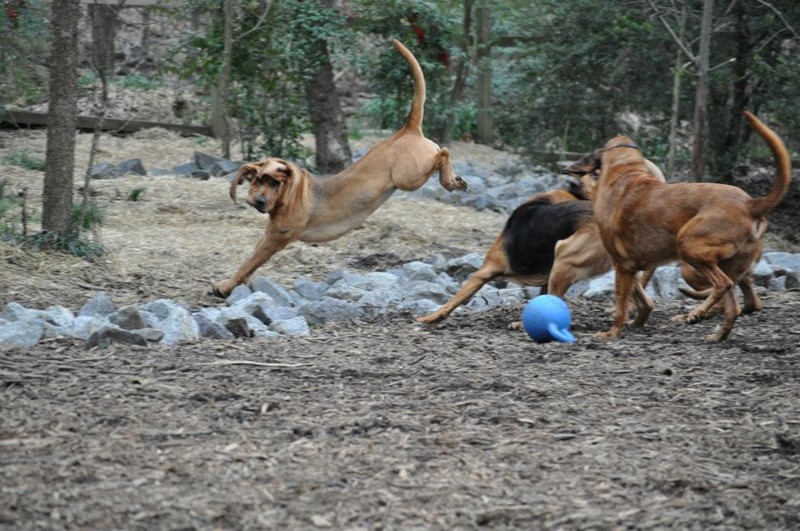 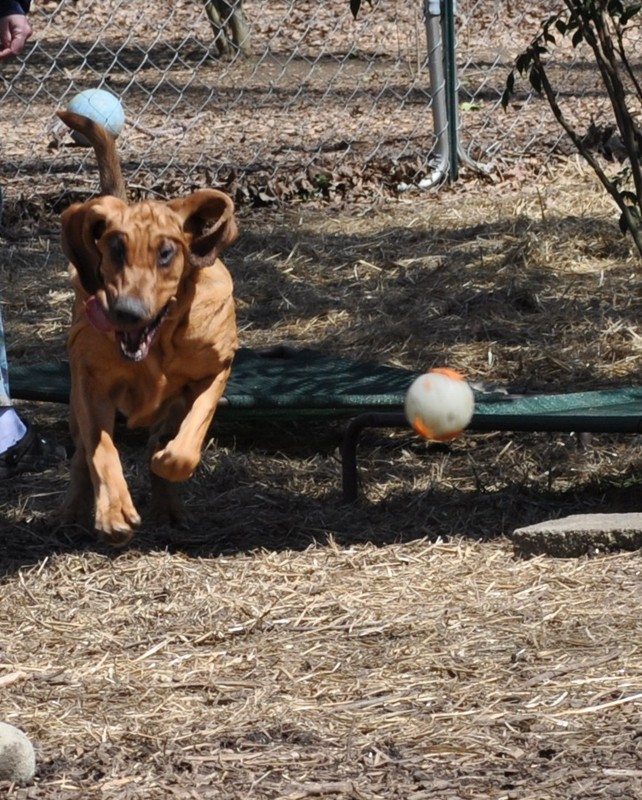 Little Bit hit the show ring at 6.5 months old. We entered her to help build points. Her very first show she went RWB. The very next day she wowed us all by going BOW for a cross over 5pt major and best BBE dog! There was no rush to get her back in the ring, we enjoy her at home and began working her in harness on mantrailing.

Once we decided we’d put her back in the ring, every time (which was only 6 shows!) she was on fire! She was second in a HUGE bred-by class at the 2012 ABC National Specialty. The very next day, at the regional specialty, she won the bred-by class, went on to winners bitch and best of winners! She was only 13 months old at that event and left there with only two single points to finish her championship. Again, we took time off (a whole year!), worked on mantrailing and she has shown she is one heck of a working girl. She earned not only her Mantrailer title (MT) but also her Mantrailer Intermediate title in back to back trailing trials. 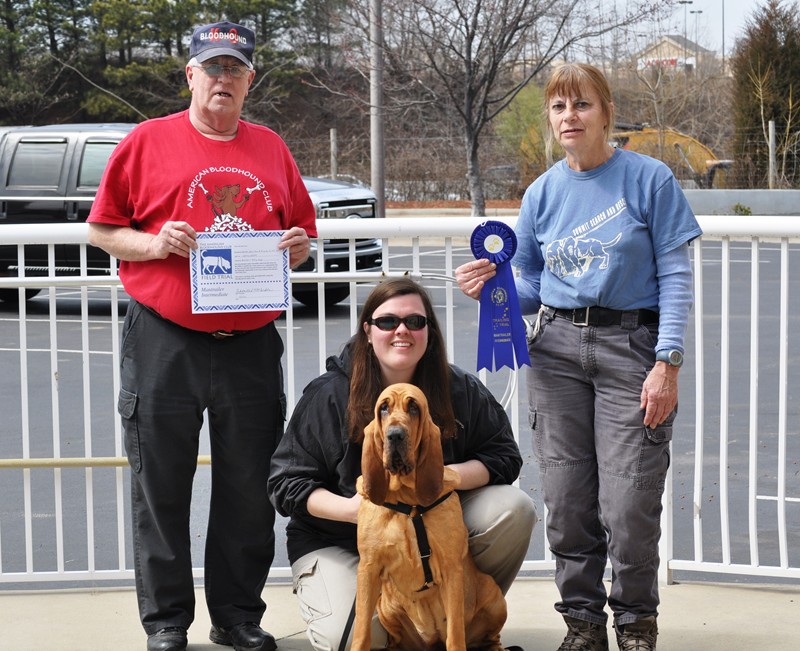 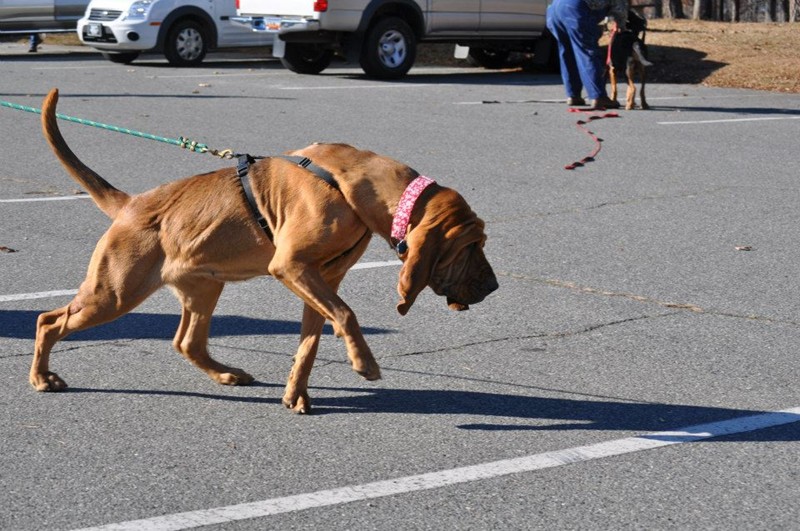 working an ID line up

In June 2013, Little Bit progressively started becoming ill. Over the course of a month, and all the while trying to figure out what was wrong, she lacked appetite, lost 12 pounds, was lethargic, would have on/off fever and elevated white blood count. On July 3rd, Little Bit was rushed into emergency surgery on a wing and a prayer she’d even survive. This was after we had decided that it was time to put her to sleep b/c she was suffering so much. The night before (8:00pm) after a day’s worth of tests at a second opinion vet, they were finally able to get an ultrasound guided long needle aspirate of a mass that was finally found in Little Bit’s chest. It was sent off for pathology that night, assumed it was cancer (and she was only 1.5yrs old!) but the choice was to be decided on what to do when the report came back. She deteriorated over night and by mid morning we had decided that we couldn’t let her suffer any more. She was struggling to breathe. My vet convinced me to hang with him and that he had called for the test results twice by 2:30pm that afternoon. At 4:00pm, he rushed to call me with the results – NOT CANCER! I broke down. Knowing it was July 4th the next day, they were closing early, through sobs I asked him what do I do … he told me in the most loving voice, bring her right now, we’re waiting for her. I swear it was like she knew what was going on. What little life she had left in her she mustered it together, we got her loaded and off we went. We also knew that there was a chance it was still cancer b/c that was only an aspirate, possibly hitting an area that wasn’t cancer. As kindly as he could, our vet reminded me (Molly) that in her state she may not make it through surgery but they were going to give it their best shot. She was opened from her spine to her sternum (show side of course but who cared at that point?!) and what they found was a mass the size of a softball with tentacles. It was attached to everything, the aorta, the lungs, the body sidewall, the diaphragm, etc. By now, we were again convinced it was cancer. She made it through surgery. Late that night we transported her to 24hr specialty care where she stayed for three more days. This girl is a fighter … it is unbelievable what she survived. The recoup was just as bad having had the rib spreader, the whole deal. It is truly amazing the will to live that she has in her. 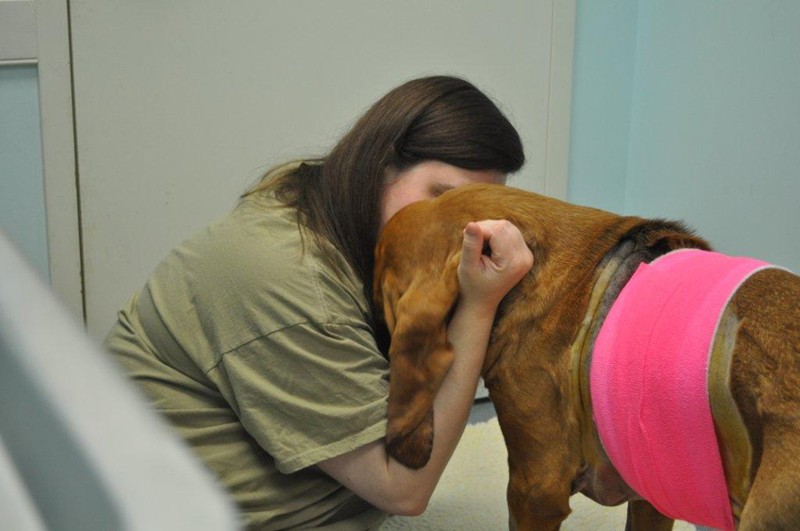 It turns out that when the mass pathology came back, it was a rare bacteria that she had inhaled (presumably while out mantrailing), usually only seen in ‘gun dogs’ and it abscessed out of her lungs and took over. They were unsure of how to treat it b/c they couldn’t get it all due to how much was attached to delicate areas … the slides showed bacteria but the cultures wouldn’t grow out. After my vet talked to the lead microbiologist at Purdue, Cornell, Antech … all of which they were unsure of what to tell my vet as far as antibiotics, the lead at NCState gave the protocol she needed. She was on them for four weeks total … two follow ups and two clear xrays, we assume that we got it all and we’ll go now every four months to check her unless something changes. She is a miracle, truly a miracle and to say we are thankful to her vets for saving her life just doesn’t sound appropriate. We are so very, very blessed to still have her. Due to the stress her body endured, the breaking of her ribs from the surgery, etc. we will likely choose not to breed Little Bit. We feel it’s asking too much of her to carry a potential full litter. And truly, that doesn’t matter to us as long as we still have her! 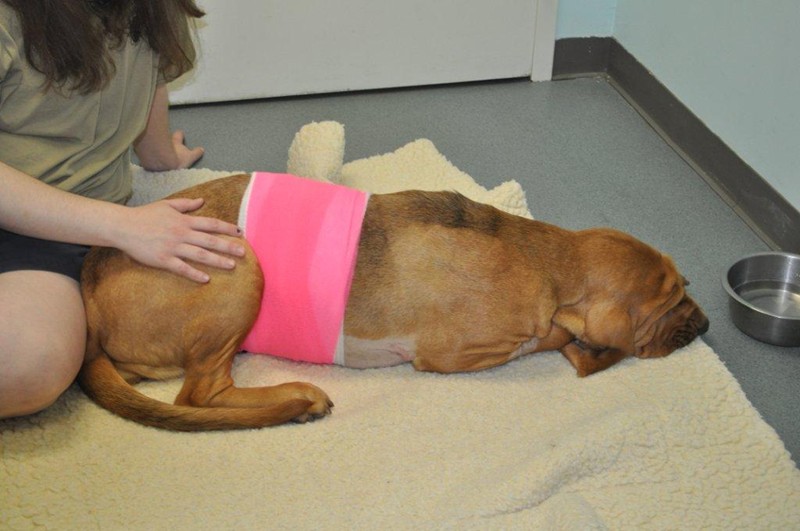 The next show she was entered at was the 2013 ABC National Specialty. This was late September 2013, just two and a half months from her almost near death experience. It is still surreal to be able to say that this girl went winners bitch AND best of winners at our National specialty to finish her championship under judge Houston Clark. The very next day, we bumped her up to the specials ring, she went select bitch for her first major win, and over champions, towards her grand championship. That Nationals is one we will ~never~ forget!
A few weeks later, in early November at the Colonial Bloodhound Club’s trailing trial, she went on to complete a difficult 31 hour old trail with a beautiful ID on her runner earning her Mantrailer Excellent title (MTX).
My girl… sometimes you have one of those dogs that worms their way into the depths of your soul. I have that dog (his name is Fin!) but I have been blessed with another. Though nothing can come as far as Fin, this is the bitch I’ve said for years I’d never have.  I prefer boys, hands down and I make no bones about it. But as a breeder, you can’t have just boys.  I never thought I’d gravitate to a bitch like I have this girl. She is a blessing and a lesson from above that I needed. I will still always prefer the boys BUT this girl … you truly CAN’T put a price on her! 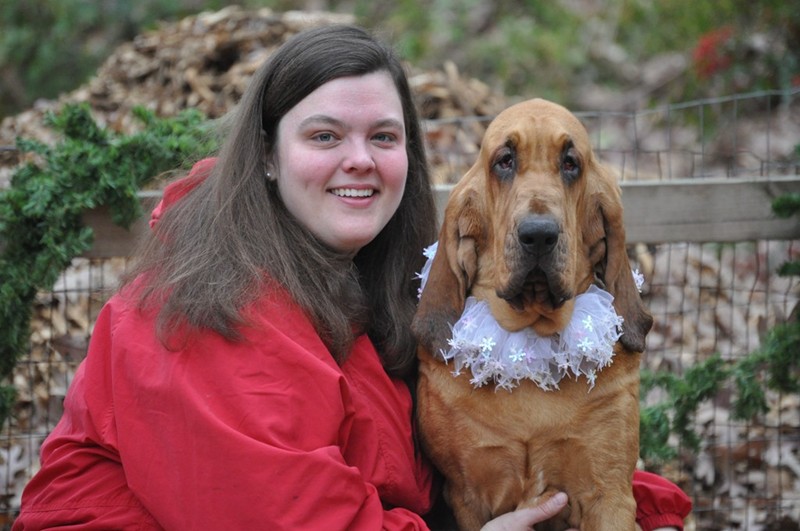 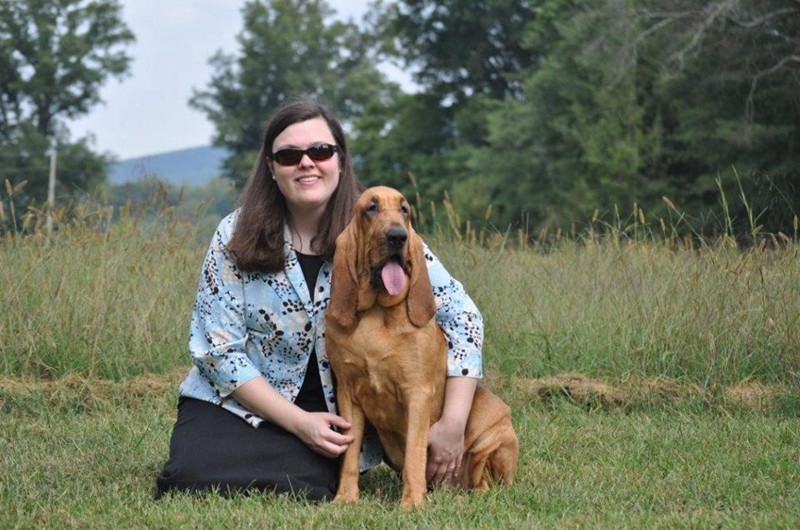