Nope! It’s an AKC tracking class! Now that Fin has achieved his MTX  (the highest man-trailing title available through the American Bloodhound Club) at our National Specialty back in November, I decided we’d try out  tracking. So far it has been a lot of fun! Same fundamentals, of course, in regards to scent and scent theory but much different than trailing 🙂 These were taken by Michael in class yesterday. 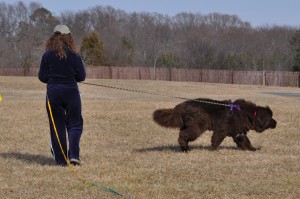 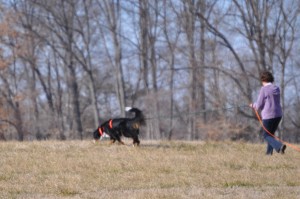 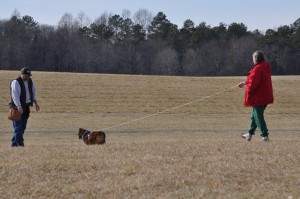 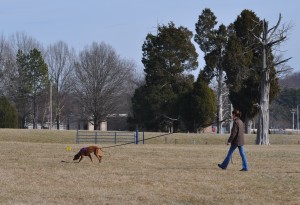 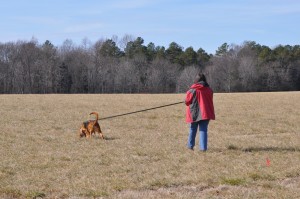 Today it snowed again – the second time this winter. Our dogs love it and love to play chase in it! This was actually taken in the last snow but I enjoyed it so much, I thought I’d share. This is Nolan (left) and Paisley playing a game of chase. 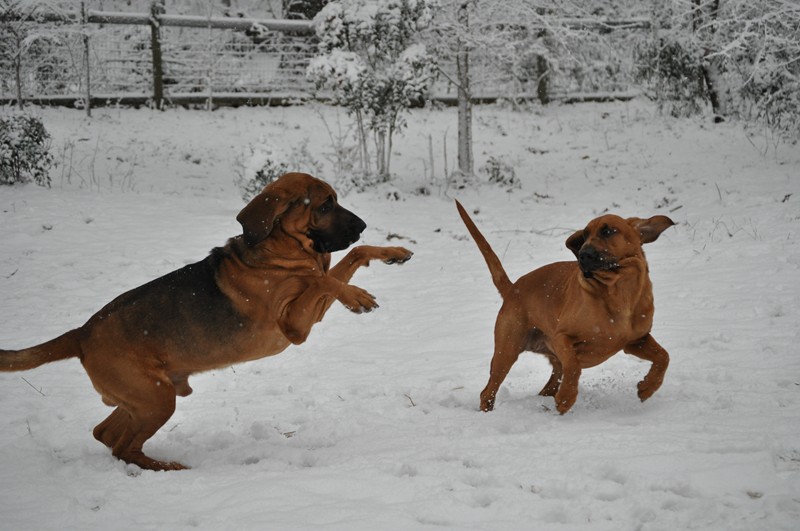 We wish you a Happy New Year and may 2011 bring you much happiness, good health and love! Pictured below is “Later” at 4.5 months old 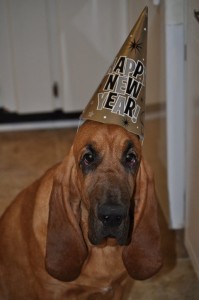 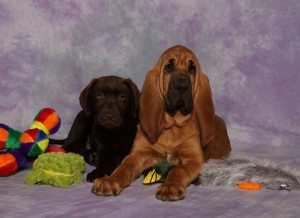 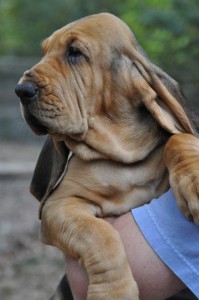 I just posted this to Facebook, but for those not on there I thought I’d share it here too. THANK you Chip, Melissa & Michele for assisting Fin in this very special birthday gift!!

Today, the day before my birthday, I received in my snail mail a present. The return address read, “From the Assisting Offices of King Fin” …. little did I know that I’d open one of the best gifts I have ever received with one exception – Fin himself. For those of you who I’ve shared Fin’s story, you can understand how special this was to me. In his short time on earth, Fin has touched more people than I can even think of. He is truly a blessing to me and he came to me in my life when I needed one most. A blessing in Bloodhound form, how better to reach me? 🙂 I am so thankful for him. He is a healthy boy that I hope to share so much more with in our future. Thanks for letting me share!

Click Here to see the video gift I received

This is written about “Luther” … Sherick M&M’s Fiddlin’ Around …. out of the state of Colorado. We are so proud of both him and his wonderful owner, Jack Vail!

A small group of people and one bloodhound named Luther searched the fields south of Fort
Collins on Wednesday night for Stewie, a dachshund who fled the crash in which his owner died last
week. Stewie wasn’t found Wednesday night, and the group planned to meet again early this morning to
resume the search.

Dana Hazlett and her daughter, Denae, organized a search party to look for Stewie on Sunday evening.
Close to 150 people showed up to help, she said. While searching the fields, Hazlet said she saw
Stewie from a distance. This week, she found out about Jack Vail and his trained 3-year-old bloodhound, Luther, and decided to ask them for help in finding Stewie. Vail and Luther do scent work through the Canine Training Academy as a hobby. The group met at the crash site around 7 p.m.
Wednesday as a group of bystanders watched the search begin. Hazlett brought along Stewie’s collar, which his owners had taken off the morning of the crash, and a toy he played with the same morning.
“I hope we find something tonight so we can put closure to this,” Hazlett said before the search.
Downey‘s wife and children are eager to find Stewie and bring him home, Hazlett said.
Vail kept Luther in his van and then let him wander around a bit before introducing him to Stewie’s
scent. Vail said he wouldn’t need to sniff Stewie’s belongings again for hours or more.

Since the Aug. 18 single-vehicle crash that killed Jason Downey, concerned citizens have stepped up to help find Stewie. The dog was seen fleeing the area where Downey‘s car burned along Larimer
County Road 19, near the Coyote Ridge Natural Area.

After zig-zagging through fields on the east side of the road for a while, Luther caught on to a scent
trail on a path running through the field. The path, an area without tall grass and weeds, would be easy
for a small dog to travel along, Vail said. Luther followed the path for some time but
eventually lost it. Vail planned to bring the bloodhound back out early in the morning to search
again when the air and ground would be fresh and it would be more likely that Stewie would be
wandering around. “I really want to see this out,” Hazlett said before the search Wednesday night. “We want to be here and see it through.” Hazlett has a dachshund herself, and she and her daughter are both animal lovers.

“The dog means so much to (the Downey family),” she said. “Here’s an open opportunity to help out
just a little bit.” Vail was confident that Luther would have a better chance of finding Stewie or his scent early this morning. He planned to search even further south and east from where Luther picked up the trail,
aiming near a tree where Animal Protection and Control officers have placed a live trap. “Now it’s just a matter of getting close to him,” Vail said. 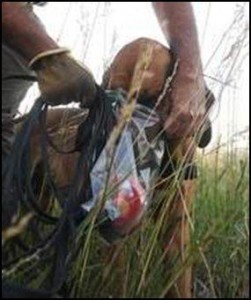 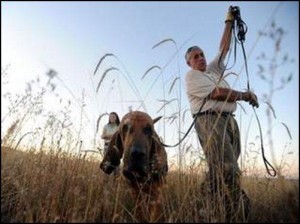 Bloodhound Luther and his owner, Jack Vail of Fort Collins, comb a field Wednesday near where dachshund Stewie was last seen. Stewie fled the scene of a crash that killed his owner, Jason Downey, last week. Search organizer Dana Hazlett follows at the left. (Rich Abrahamson /The Coloradoan)

Stewie, a dachshund that belonged to Jason Downey, is missing in the area of Taft Hill Road just south of Trilby Road. (Photo courtesy of Downey family)

Sunny on the loveseat in our den …. Fin by the fire place. Both of them are enjoying the afternoon INSIDE out of the heat, LOL! 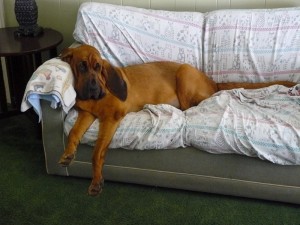 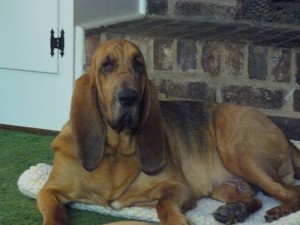 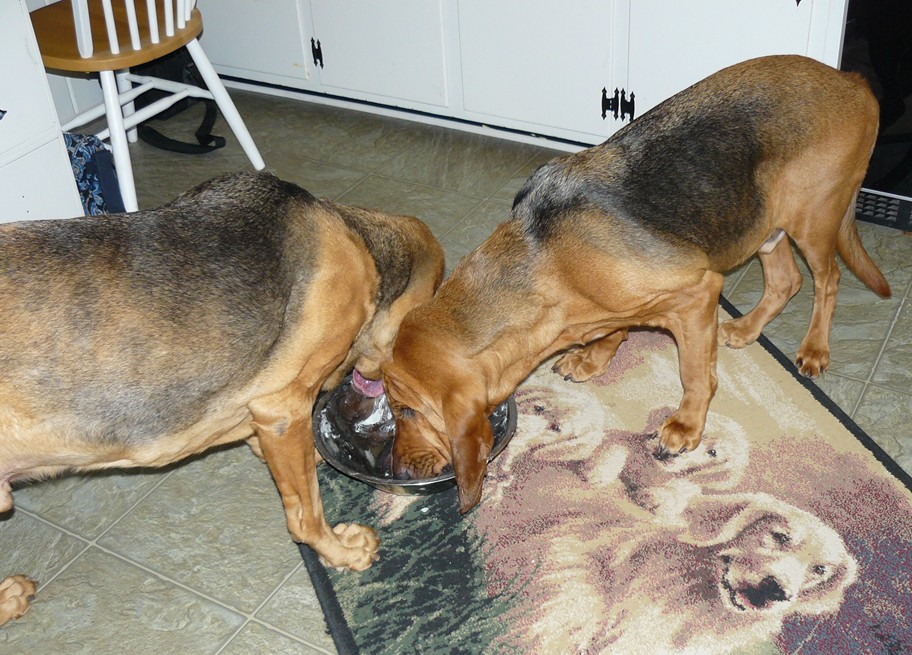 It was a nice low key day, at home with the dogs and dog friendly (our favorite!) company. We had dinner out on the deck and of course there would be Bloodhounds out there with us! Willie and Fin enjoyed bits of chicken, steak, shrimp and watermelon 🙂 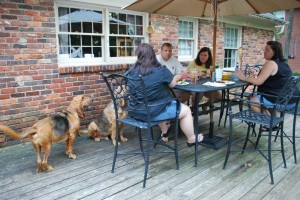 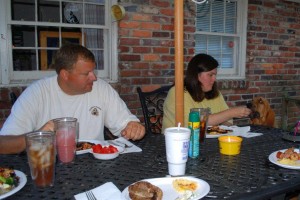 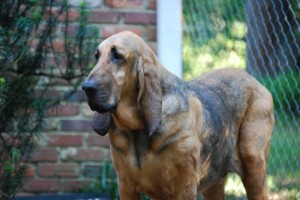 A weekend at the beach

We went to visit my Dad this weekend. He lives at Ocean Isle Beach, NC. It was a great weekend with friends, sun and fun! Fin & Sunny got to come along to join in the festivities. They had a great time too! 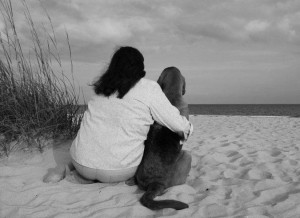 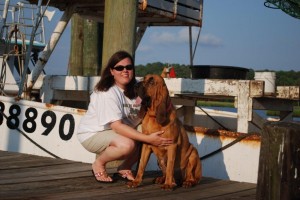