We went out this weekend and met up with a great group of folks to go trailing. We are working towards the Feb 2010 ABC trailing trials that will be held here in our very own NC! All of the dogs did very well throughout the weekend. Some of our own highlights were Paisley running a trail laid to MT specifications but w/two runners at the end, her getting to the end with a great jump up ID on the correct runner and Michael not realizing SHE was correct b/c he had confused the scent articles!…..Higgins working an 18 hour old trail and his first one with two runners at the end (one of them was Molly (the cross runner) – that was HARD for him not to focus on just saying hello!) and ….drum roll….FINNY working a 24 hour old trail with three runners at the end (two cross runners – one of them being Michael) and him going to the correct runner…was a fun and great weekend had by all! Here is a photo we liked of Michael & Paisley working. 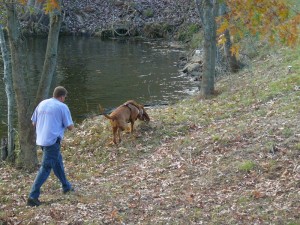 “Anybody who doesn’t know what soap tastes like never washed a dog.”

“A dog is the only thing on this earth that loves you more than he loves himself.”

“Happiness is a warm puppy.”

“Most dogs don’t think they’re human; they know they are.”

“The reason a dog has so many friends is that he wags his tail instead of his tongue.”

“If there are no dogs in Heaven, then when I die I want to go where they went.”

“Dogs are the most amazing creatures; they give unconditional love. For me they are a role model for being alive.”

“The average dog is a nicer person than the average person.”

"We give dogs time we can spare, space we can spare and love we can spare. And in return, dogs give us their all. It's the best deal man has ever made."
https://mandmbloodhounds.com/?testimonial=6729
0
0
M + M Bloodhounds