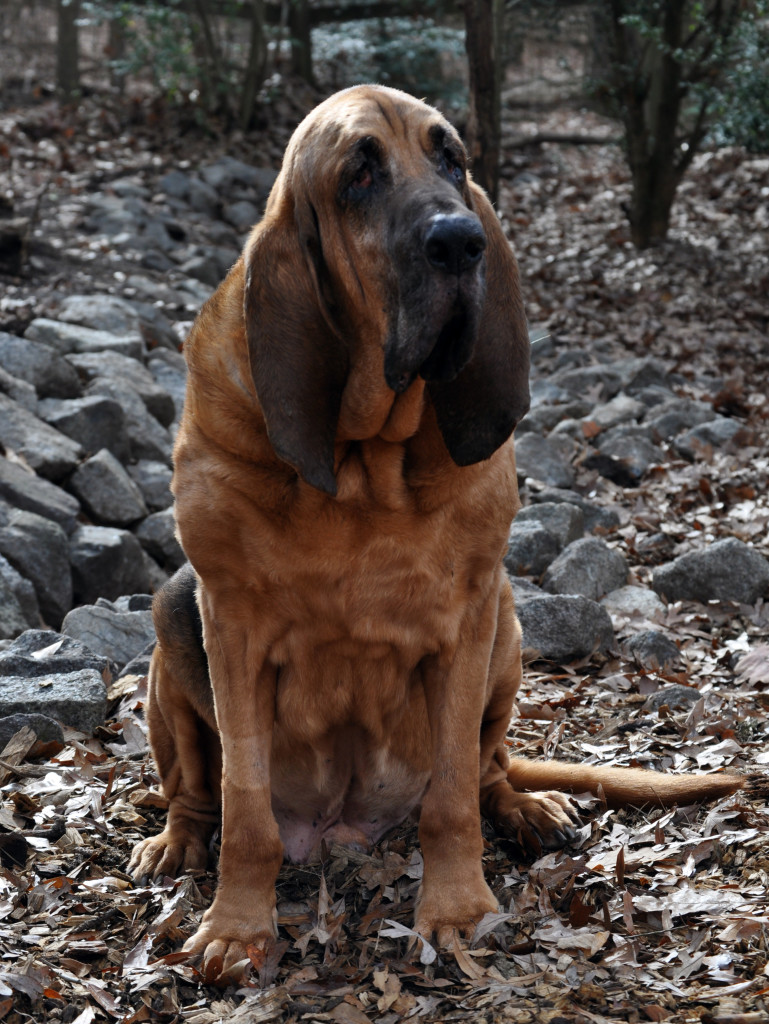 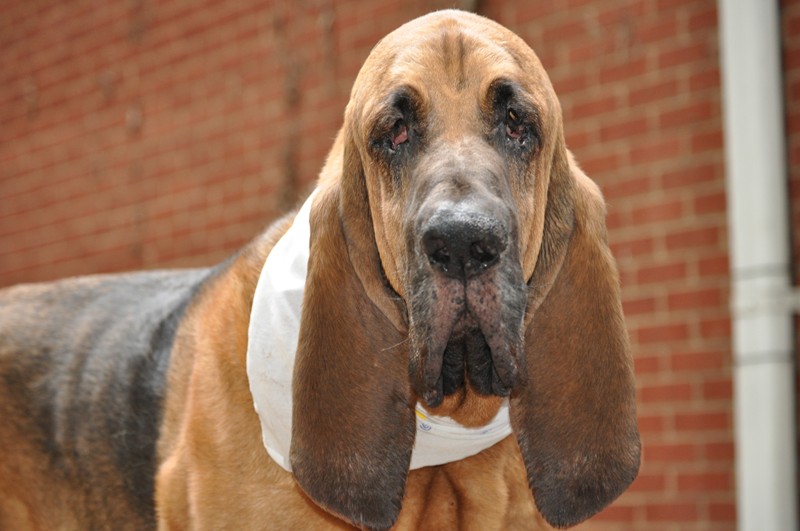 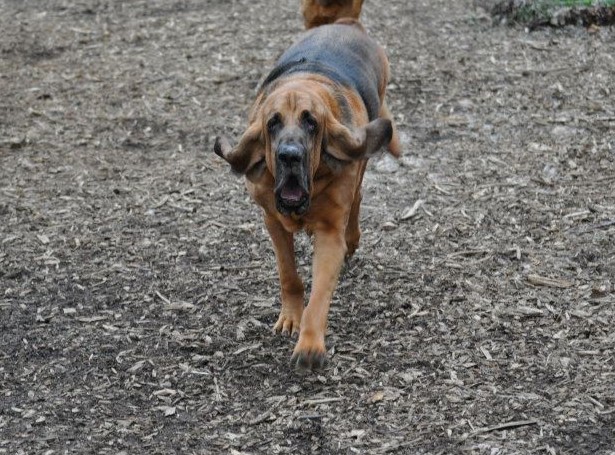 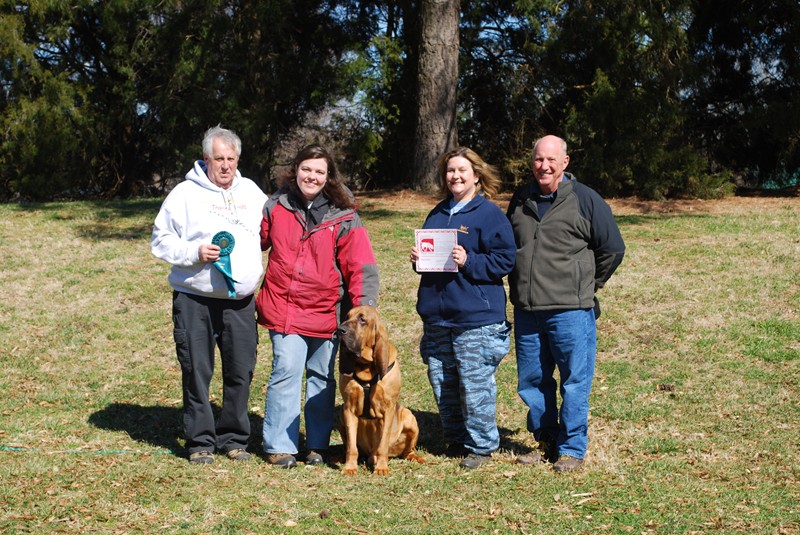 New Man-trailer Title (MT)
Nolan, who was the resident clown, brought a smile and a chuckle to us daily. Life sure can be boring with out him! He finished his AKC championship in 2005 rather quickly. He was awarded four majors, three by going Best of Breed over ranked specials and one by going Winners Dog/Best of Winners at the supported entry in Harrisburg, PA.
In all of 2005 he was ranked in the top twenty Bloodhound breed points and received an invitation to compete in the January 2006 AKC/Eukanuba National Championship Show held in Tampa Florida. In all of 2006, he was ranked in the top twenty Bloodhound breed & all breed points. He finished 2006 as #17 all breed points, tied #10 breed points and again was invited to attend the AKC/Eukanuba National Championship Show held January 2007.
At the February 2008 Southeastern Regional Specialty in Atlanta, GA, Nolan was awarded Best of Opposite Sex out of a large entry of specials. The following day at the supported entry, Nolan was awarded Best of Breed. At the May 2008 Prarielands Midwest Regional Specialty in Bloomington, IL, under judge KeKe Khan, Nolan was awarded one of only three Award of Merits. The following Monday he was awarded Best of Opposite Sex. As 2008 is came to a close, Nolan again continued to be in top twenty Bloodhounds in both the breed & all breed points for the whole year. He had been shown a total of 4 four weekends and been able to maintain this ranking! ALL of this was obtained with, owner-handler, Molly.  For the fourth year in a row, he was invited to attend the 2008 AKC/Eukanuba National Championship Show.  Way to go Nolan!
Nolan retired from the show ring and enjoyed life without much to do! At home Nolan was easy going and reminded us constantly of his dad, Wally. Just like Wally, this boy had a set of lungs on him too — you ought to have heard him bay! He enjoyed picking up man-trailing and also enjoys some light obedience work. In February 2010, at the Southeastern Bloodhound Club’s trailing trial, handled by Molly he achieved his man-trailer title (MT). We were so proud of him!
Nolan sired one litter of six puppies and one litter of eleven puppies and one singleton litter who is our boy Later. There are multiple championed puppies and multiple working dogs from both of these litters. Nolan is now a great-grandfather to three litters and truly is the patriarch of our bloodline.
Nolan is a 2013 inductee to the American Bloodhound Club’s Stud Dog Hall of Fame, which is no easy accomplishment. It usually takes many more than just a few litters to pull this off. He has been a wonderful asset to this breed and we loved him dearly!
Very sadly, the day after Christmas in 2015, Nolan was ready to say goodbye and was kindly put to rest due to old age. His presence is missed daily and he has left a huge hole in our hearts. It is a pleasure to see him in his legacy left behind. Run free our dear, sweet boy. We love you so much! 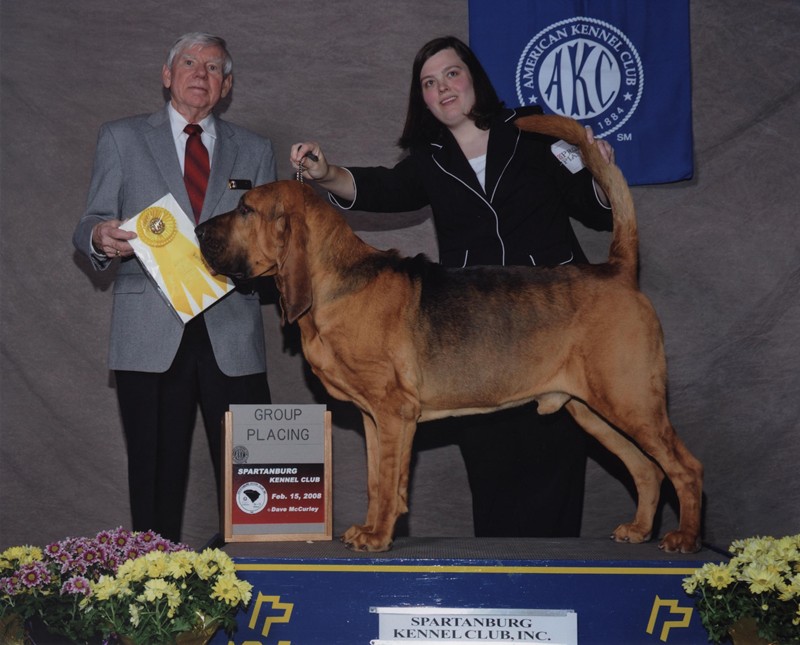 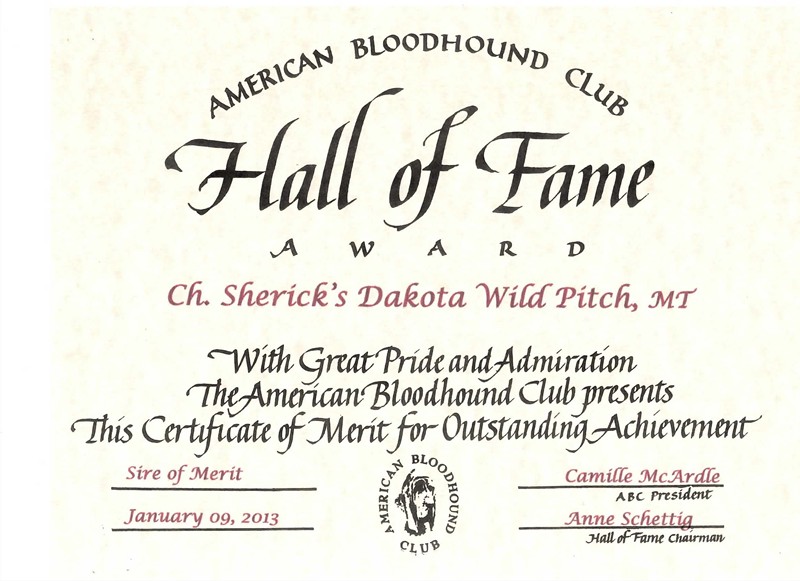